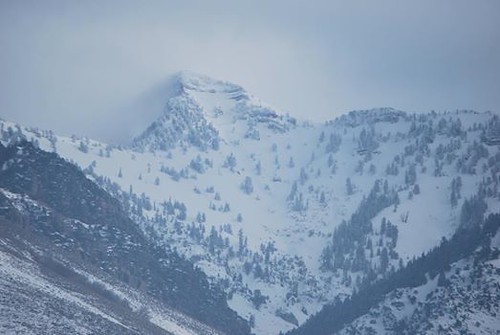 When you ask John Chadwick what’s the craziest job he’s ever had you would think the commercial developer would say “owner of a ski resort.” The longtime local and industrial developer will be introducing Utahns to their ski area number 13 this December. It will be the first new ski area development in the state in 33 years.

“My family bought the property in 1967 and as a kid I always thought it would make a great ski resort,” said Chadwick. Then in 2002, he sold a car to an Argentinian Olympic ski coach and wound up taking him skiing on his mountain.

“We got to bottom and he said, ‘you need to put ski resort here.’” Eight years, three lifts and 23 trails later, Cherry Peak Resort will service Logan and surrounding communities. a base population, Chadwick says, a base of about 150,000 people. “The location is what will bring people,” he said. “We’re 14 minutes from Smithfield, 8 minutes from Richmond, 15 minutes from Lewiston. If you live in Salt Lake and Park City, you can all get to a resort quickly, but that’s not the case up here.”

Beaver Mountain is the closest ski area but it has access issues with a long drive and windy road. Chadwick jokes Cherry Peak will be the convenience store of skiing. “It’ll probably never be a destination area but it’ll keep locals from driving hours to Idaho or the Cottonwoods to go skiing,” he said. “This is a ski resort, not an excuse for a housing development. We could do development in the future but have not made plans along those lines.”

In addition, because he operates on private land, they have no issues with removing boulders and trees. “The runs will be as smooth as Deer Valley, we’ll have snowmaking and the largest night skiing operation north of I-80.” Cherry Peak will open 17 runs for night skiing.

He plans for water slides, ziplines, mountain biking, concerts, family reunions and weddings in the summer.

Wondering what the snow will be like? Climate studies record snowfall comparable to Park City’s with an average annual 322 inches at the summit. The base elevation is 5,800 feet, peak 7,000-plus’, with almost 1300 foot vertical. Lift tickets this season are $42 adult, $32 youth.

The entire project is funded through private investors, thus eliminating the pitfalls that other resort planners have plummeted into. “You can’t go bankrupt if don’t have debt,” said Chadwick. “That’s the biggest difference.”

So maybe Chadwick isn’t so crazy after all.