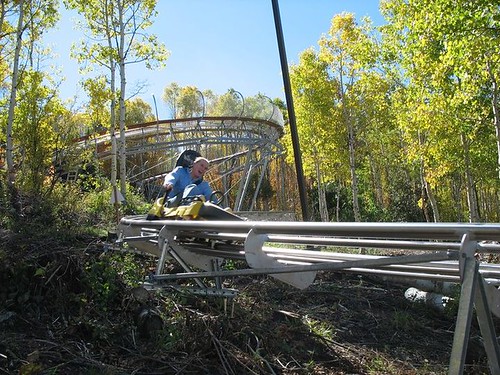 The 5,450-foot stainless steel track was installed this summer. Each section is unique and is designed to adapt to the contours of the steep mountain terrain. The cart will climb 1,580 feet of uphill track then disengage from the cable and rely on gravity to carry the rider down the twists and turns of 3870 feet of downhill track. The driver controls the speed through a breaking system, with electronic safety systems in place to avoid collisions with other carts.

“The downhill track was designed with no straight sections. Once you get going it really is exhilarating, with speeds up to 25 mph. It’s plenty fast enough for even an adrenaline junkie,” Berkshire East’s Gabe Porter-Henry told SnoCountry.com. “Due to its length, steep terrain, and an unbelievable collections of dips, turns, screwdriver 360s, we strongly believe Berkshire East will be the most thrilling mountain coaster in North America and will set a new bar of excellence within the mountain coaster industry.
”The carts can accommodate a driver and a passenger as young as three years old at a minimum of 36 inches.  “The ability to bring a young passenger and for the driver to descend at a comfortable speed allows families to participate with a wide range of ages,” Porter-Henry told us.
The coaster track is designed to be elevated above the winter snowpack and will run year-round.
Construction on a lift-serviced mountain bike park also began this summer, with plans to open summer 2015. The Mountain Bike Park will feature flow style trail construction with a jump trail, beginner, intermediate, and advanced trails on terrain that is accessible from the new Summit Quad.
“With the addition of the mountain bike park and mountain coaster to our zip line canopy tours and phenomenal skiing terrain, we hope to make Berkshire East a premier year-round family destination,” Porter-Henry told us.
In addition to the trails, Berkshire East will supply high-end bike rentals, lessons, guided tours, and retail, food and beverage out the recently built 12,000-square-foot timber frame lodge.Trail design is by Gravity Logic of British Columbia, a company that has developed many of the West’s premier downhill mountain bike venues, including the Whistler Mountain Bike Park. The downhill trails are designed to integrate with an existing 35 miles of community trails.
Photo:  Berkshire East's new Mountain Coaster opens Columbus weekend (Berkshire East)
Tweet
Tags:
Berkshire East
It's Time: Colorado Resorts Announce Opening Dates...
SnoCountry's Best All Mountain Skis For 2015