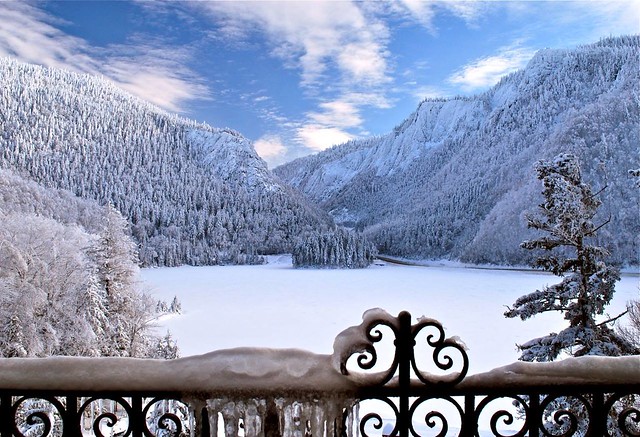 The future renovation and expansion of The Balsams moved one step closer to reality last week when the New Hampshire state Senate unanimously approved a bill that would allow for the creation of Tax Increment Financing (TIF) districts in unincorporated places in the state.

Senate Bill 30 now goes to the House of Representatives, "where it will probably be assigned to the House Finance Committee, who will make a recommendation to the House Floor," Senator Jeff Woodburn, who sponsored the bill, told SnoCountry.com. He expects it will be more than a month before any decisions will be made.

The Balsams is short $28 million of the estimated $143 million price tag on the first phase of the project that they hope to break ground on this summer.

SB30 is designed to allow unincorporated places in New Hampshire, like Dixville, where The Balsams is located, to create a TIF district. This would in turn allow the state to guarantee a bond, as it can for other municipalities in the state.

“We want to be clear that The Balsams is not asking for a loan from the state,” The Balsams’ Scott Tranchemontagne told us. “We are asking the state to guarantee a private bond that would be secured by a private bank.”

Senator Woodburn contends that public-private partnerships can have a positive result on the area’s economy.

“Should the government be involved in assisting private enterprise? Across the country and in New Hampshire there is a precedent that this is what we do. Many ski areas in the state are located on federal land. There are thousands of guaranteed loans or bonds by the District Finance Authority to entities with less experience than Les Otten,” Woodburn added.

In accordance with N.H. State Law, municipalities have the ability to create TIF districts. The establishment of such districts allows a municipality to capture all new property taxes generated by new development within said districts in order to finance infrastructure improvements, as well as the operation and maintenance of such improvements.

The original wording of the bill provided for not only the creation of TIFs in unincorporated places, but also specifically to create a TIF in Dixville. The bill has since been amended to remove the wording specific to Dixville, but Tranchemontagne hopes that further amendments to the bill will reinstate the provision so the project can move forward. "We've been assured by Governor Hassan and the Senate President that they will do everything they can to make this happen."

“There are commitments to continue to work through the process. That should mean trying to figure out a way to move an aspect of this financing process forward," Senator Woodburn told us. “As long as the bill is alive, it can be adjusted along the way, but we certainly, at a bare minimum, need this financing district to occur.”

Photos: With epic annual snow fall and 2,200 acres of skiing across 3,800 acres of pristine forest, The Balsams will be an ambitious ski expansion. (The Balsams/Facebook)