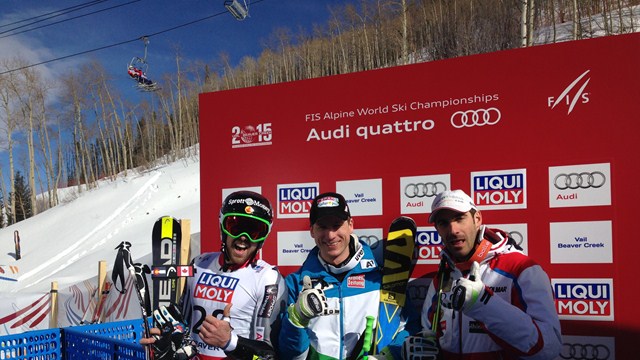 What a difference a day makes. After the men’s super-G at the FIS Alpine World Ski Championship at Beaver Creek, Colo. was postponed Wednesday due to heavy snowfall and high winds. Thursday’s re-scheduled race was staged under dream conditions with blue skies on a well-prepared course.

The Championships are but a few days and two races old and all the gold so far belongs to Austria here on American turf. First Anna Fenninger Tuesday in the women's super-G and now Hannes Reichelt in the men's super-G.

The race lived up to all expectations as the spectacular skiing, heart-stopping spills and numerous lead changes kept the sell-out crowd on the edge of its seat. Silver went to Canadian Dustin Cook and bronze to Frenchman Adrien Theaux.

“It sounds really good to be called a World Champion,” Reichelt said. “I felt a lot of pressure, not from the outside, but I put a lot of pressure on myself because I wanted to repeat what I did in December at the World Cup, so now I am happy to be able to relax a bit.”

The Canadian came from out of nowhere with to claim the silver medal 0.11 off the pace. Cook’s highest previous World Cup finish was 12th place. Rounding out the top-three was Frenchman Adrien Theaux 0.24 behind.

“I’m a lot less surprised than most people, I’ve had fast splits all year and I love this hill,” said Cook. “I ski here all the time, it’s basically home. I really wanted to put one down and it worked out.”

Many of the favorites, such as America's Ted Ligety and Norway’s Speed King Kjetil Jansrud, had rough runs. Ligety finished well off the mark in ninth place, while Jansrud clipped the first gate with his left shoulder, setting up a wild run.

Despite the early mistake, Jansrud still finished in fourth place. Jansrud had his shoulder in a sling after the race and will go for further medical evaluation this evening.

Two big names also made their comeback, as the USA's Bode Miller and Norway's Aksel Lund Svindal had their first races after both battled back from injuries and had two very different results.

Miller was near the end of a perfect run with a 0.06 lead when he too clipped a gate, crashed and went sliding down the course. He is undergoing further medical evaluation for a laceration on his leg. At the other end of the spectrum, Svindal had a solid comeback and ended the race in sixth place.

Bode Miller suffered a torn hamstring tendon from a lower leg laceration as a result of crashing 59 seconds into the men’s super G in Beaver Creek. According to U.S. Ski Team Medical Director Kyle Wilkens, Miller underwent successful surgery at Vail Valley Medical Center with Dr. Randy Viola and Dr. Tom Hackett. He was released following surgery. The injury will keep him out of the Championships. Miller crashed while leading the super G. He skied down on his own and was treated in the finish area for a lower right leg laceration. He then went to Vail Valley Medical Center for further evaluation and surgery.

The race featured a special ghost forerunner tribute to two members of the U.S. Ski Team killed in an avalanche Jan. 5 in Sölden, Austria.

Ronnie Berlack, of Franconia, N.H., and Bryce Astle, of Sandy, Utah, were killed in an avalanche while free skiing. Both were promising young racers on the U.S. Ski Team’s development squad and had recently arrived in Europe to compete there. They were part of a group of six athletes skiing together; the other four skied out of the slide and were part of the initial rescue efforts.

The ladies are back in the forefront tomorrow as the marquee downhill is scheduled for 11 a.m. with high expectations on hometown hero Lindsey Vonn.

The men will hold their last downhill training tomorrow before they go for gold on the Birds of Prey downhill course on Saturday at 11 a.m.

So far Austria is two-for-two at these World Championships. Anna Fenninger took the gold medal in the super-G, while Reichelt won today’s race, putting the Austrians atop the medal standings.

Photo: Hannes Reichelt made it two in a row atop the podium for the Austrian team. (FSIS)