Austrians Hot As World Cup Resumes In Europe; No Americans On Podiums 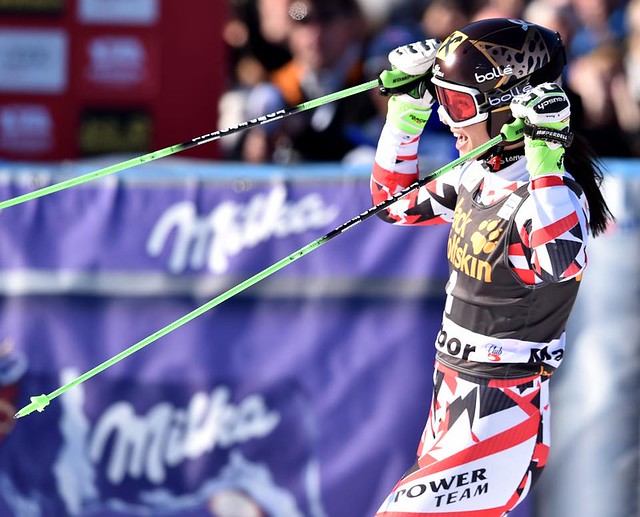 Austria's Anna Fenninger claimed her second World Cup victory of the season in the 51st edition of the Golden Fox in Maribor, Slovenia Saturday.

The reigning World Champion clocked a combined time of 2:24.50 to edge Germany's Viktoria Rebensburg, who finished a mere 0.04 seconds behind. Rounding out the podium was Tina Weirather, 0.30 seconds off the pace.

America’s Mikaela Shiffrin was fifth and Lindsey Vonn did not finish the first race. Vonn was late and wide going into a turn, lost her balance, fell to the snow and slid into nearby netting with her skis coming off. Officials tended to her. She was later shown on camera standing on her own, smiling and waving.

Fenninger led Rebensburg by 0.03 seconds after the first run and managed to hold on to her position thanks to a very strong last section. Fenninger's second run wasn't perfect in the first two sections. She was half of a second behind at the second intermediate time.

In front of thousands of cheering fans, home town favorite Tina Maze, who pocketed two gold medals and a silver at the just concluded World Championships in Vail/Beaver Creek, Colo. skied out in the first run after she made a mistake a few gates before the finish line. A slalom is set at Maribor Sunday.

After winning 9 medals at the World Championships, yet failing to place an athlete in the top 10 of the downhill, the Austrian team has redeemed themselves in front of the home crowd in Saalbach. The Austrians swept the downhill to the delight of the 10,000 fans cheering along the course.

It’s a particularly sweet victory for Mattias Mayer who had been knocking on the door of the top step of the podium multiple times this year but has been missing a top position ever since his Olympic victory in Sochi last February.

Max Franz’s second place proved bitter-sweet as he was close to locking his first career’s victory after a great run; but a small mistake in the top section of the course proved costly and the young Austrian completed his run a mere 0.02 seconds slower than Mayer.

Rounding out the Austrian podium today was super-G World Champion Hannes Reichelt who skied a smooth and not too risky run to finish 0.21 behind Mayer.