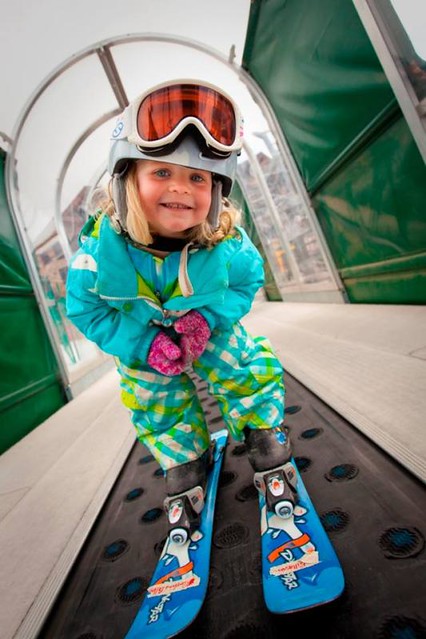 It’s long been a desire of ski and snowboard resorts to get kids on the slopes at as early an age as possible in hopes that they get hooked on the sport early on. At the Aspen-Snowmass Ski and Snowboard Schools, this concept has been taken to another level.

Classes are customized to specific ages under seven years old. Both half-day and full-day lessons can be purchased at the mountain or in advance online – with tickets, equipment and food included.

The lessons are available at Snowmass and Buttermilk, with the oldest, more skilled groups hitting the slopes at Aspen Highlands, too, but on skis only.

“We’ve tied our instruction to the psychological, emotional, motor skills and cognitive function of development,” Katie Ertl, managing director of Aspen-Snowmass ski schools, told SnoCountry.com. “We see the young ones as an important guest because they will be our guests of the future.”

For instance, if a 2-1/2 or 3 year-old is ready to hit the slopes, the ski schools in the Aspen resort complex have a class designed for that age – plus some childcare time thrown in. The Cubs on Skis program has instructors with early-childhood training, a roped-off area to get comfortable on skis and an indoor childcare and play area at either Snowmass or Buttermilk.

The ski school has a program for those 3 or 4 year olds who are potty trained and can spend more time outdoors with instruction that links games and play with skiing techniques.

At ages 5 and 6, snowboarders join skiers in the Grizzlies program. Youngsters are separated into groups according to ability level, either skiing or riding. At this point, instructors focus on building the confidence that a young skier or snowboarder has while on the slopes.

“Kids differ according to stamina, coordination and even how well they can stand on skis,” said Ertl. “That’s why we break them in small age groups so that they are in groups that are alike.”

During lessons, the resort’s instructors place added emphasis on the Skier Responsibility Code to ingrain safety into their young minds.

Aspen-Snowmass has plenty of information on its website to inform parents and guardians about the nature of the resort’s instruction, skill levels and what the kids need to have in order to sign up and participate.