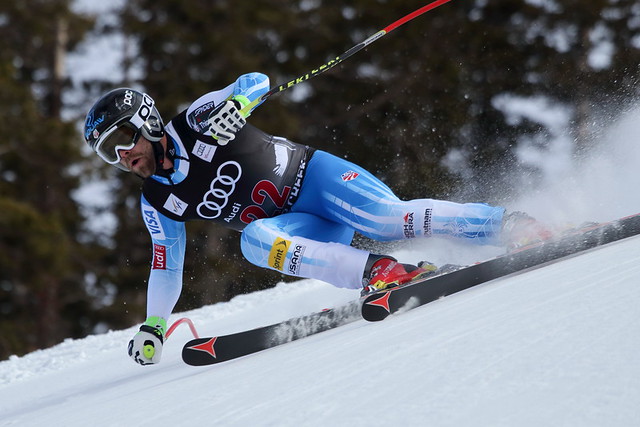 Meanwhile, on the women’s tour, Mikaela Shiffrin of Eagle Vail, Colo. made her way back on the podium with a third place finish in the giant slalom at Kuehtail in Tirol, Austria.

First to Italy: It was first time for the men on the Deborah Campognini downhill course, which Ganong used to his advantage.

The course was the site of the site of the women’s downhill in the World Championships of 1985 and 2005. Matthias Mayer of Austria was the only one who got close to Ganong, finishing in second, nine-hundredths back. Italy's Dominick Paris was third.

Ganong took advantage of information from teammate Steven Nyman from (Sundance, Utah, who won last weekend's Val Gardena downhill and was on the podium in Beaver Creek. Nyman started out for the USA in the eighth position, executing his planned line but finding clearly where time could be gained.

His radioed advice to Ganong that proved beneficial. Starting 16th, Ganong took charge of the race from the outset. He skied a very straight line to build a lead, then nailed a perfect sweeping turn through the final carousel to take the lead. It was his second career podium after finishing third in Kvitfjell, Norway last February.

“It was a perfect run! I love to take on a new challenge and a new slope. I love the hill—the mountains are huge here and it’s fun skiing,” Ganong said. “I went really, really straight in a couple areas. It was really smooth and I was able to carry it all the way down. The last big carousel turn I did perfectly—I don’t think I could do that again if I tried.”

Back to the women in Austria: Shiffrin won the first run at Sunday's giant slalom, but battled rough conditions and poor visibility to take third place overall. Sara Hector of Sweden won her first World Cup, and Austria’s Anna Fenninger was second.

Kuehtai in Tirol, Austria was a venue switch from Semmering due to snow conditions. With a straight-set second run, the course resembled a super G more than a giant slalom, not Shiffrin’s specialty. She held back a little on the run, missing first place by .18.

She will be back Monday, hunting for the slalom win in Kuehtai in Tirol. The tech women then break until Jan. 4, when they head to Zagreb, Croatia.