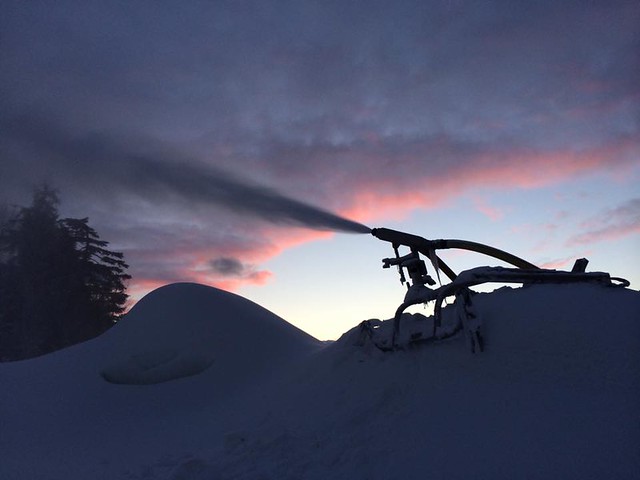 Alaskan skiers and snowboarders are putting last season’s many weather disappointments behind them as resorts in the Last Frontier begin to open for 2015-2016 season.

Hilltop Ski Area, just outside Anchorage, became the first Alaska area to open when the nonprofit hill began spinning its two lifts Nov. 20 after a concerted snowmaking effort in the last month.

“Right now, pretty much 100 percent of our snow is man-made,” said Hilltop’s Steve Remme.  “We’ll have four to six inches coverage on everything so we can groom it properly with the tiller.”

Like most Alaska resorts, Hilltop features night skiing to offset the lack of sun in the near-Artic region. Hilltop opens at 3 p.m. weekdays and runs till 8 p.m., until 9 p.m. on Fridays and weekends when the lifts open at 9 a.m. Three lighted ski jumps nearby promote that sport among Anchorage youths.

The state’s largest winter resort, Alyeska Ski Resort, near Anchorage, has set Thursday, Nov. 21 for opening. Midweek skiers and riders get free tickets if they stay at The Hotel at Alyeska.

Moose Mountain is open with 1,300 feet of vertical at the Fairbanks-area that boasts as southern exposure that produces longer days for intermediate and advanced skiers and riders. “Terrestrial trams,” or buses, are the way to get up the hill.

Juneau-area Eaglecrest has put Dec. 5 on the calendar as its opening day. Management cut the cost of season tickets by 10 percent to bring skiers and riders back after a poor snow season last year. The mountain is open Thursdays through Mondays for most of the season.

Mount Aurora SkiLand, outside Fairbanks, boasts the northern-most chairlift on the continent for skiing and riding 100 acres Saturdays and Sundays only.

Birch Hill, is operated by U.S. Army near Fort Wainwright. The mountain has only night skiing in Fairbanks area.

Mt. Eyak Ski Area sits above the town of Cordova and across the bay from Anchorage. The ski area boasts a circa-1939 single chairlift and rope tow serving 800 vertical on 30 trails.

Arctic Valley is just outside Anchorage. Operating as a nonprofit operation, the mountain has a T-bar and two chairlifts for 1,200 feet of vertical of wide-open trails.