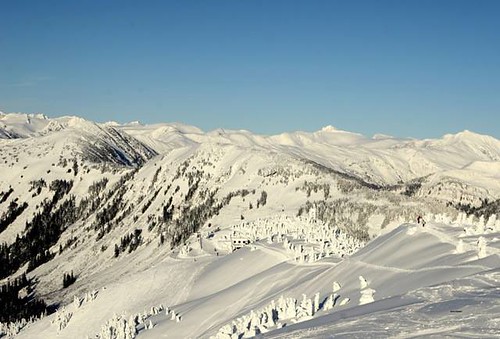 In the Land of the Midnight Sun, the ski and snowboard season -- short in hours but long in days – revolves around one destination resort and a slew of local, community-based town hills.

Improvements at Alaska’s eight skiing and riding mountains tend more toward a new coat of paint or a revitalized lift than the major construction or terrain projects in the Lower 48, there are plenty of trails and slopes to carve some turns in the far north.

Centered around the three urban centers of Anchorage, Fairbanks and Juneau, these mountains cater to locals and area visitors. The largest, Aleyska Resort, is the only resort with a major hotel, the 600-room Aleyska Hotel. The hotel is enticing overnight visitors with a midweek package (Sunday-Thursday) in December and January for $159 per night that includes $25 food and beverage credit and a midweek lift ticket.

Here’s a look at the other Alaskan ski and snowboard mountains:

Moose Mountain. With 1,300 feet of vertical, this Fairbanks-area brags of a southern exposure that produces longer days for intermediate and advanced skiers and riders. A frequent inversion also makes it warmer than in the city, and the prime uphill transportation is in “trams,” or buses with ski racks.

Mount Aurora SkiLand. Outside Fairbanks, SkiLand boasts the northern-most chairlift on the continent for skiing and riding 100 acres on Saturdays and Sundays only. An early-bird season pass sale runs for the first four days of the season, although opening day is yet to be announced.

Birch Hill. Operated by U.S. Army near Fort Wainwright, the mountain has only night skiing in Fairbanks area.

Mt. Eyak Ski Area. Above the town of Cordova and across the bay from Anchorage, this ski area is a step back in time, with a circa-1939 single chairlift and rope tow serving 800 vertical on 30 trails.

Arctic Valley. Just outside Anchorage, the nonprofit operation raised money this fall to give its venerable T-bar, built in 1961, an electrical upgrade. Two chairlifts also serve the 1,200 feet of vertical of wide-open trails. The Alpenglow Lodge can be rented for private parties.

Hilltop Ski Area. This Anchorage-area nonprofit directs its focus on recreation for city youth. Lifts run in the afternoons during the week, all day on weekends, and there are three lighted ski jumps nearby.

Eaglecrest. The only Juneau-area ski area, Eaglecrest put in a new base lodge this summer for tickets, ski school, and rental and repairs. A platter lift and chair serve nearly 300 vertical feet, and operate Thursdays through Mondays for most of the season. Olympian Hilary Lindh got her start here and a scholarship is offered annually in her name.

Photo: Eaglecrest, near Juneau, is one of eight Alaska ski resorts ready for visitors (Eaglecrest)