XC Areas With Snowmaking Had A Pretty Good Winter 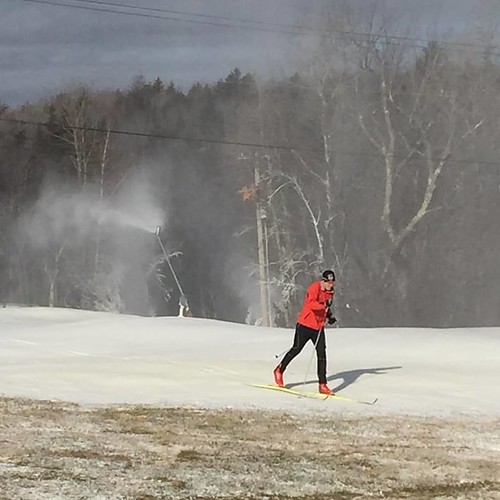 West Coast ski resorts had seen a lack of snow for a few years and in the winter of 2015-16, it was the east and central regions’ turn. Alpine ski areas have been making snow for decades but it is relatively new for cross country ski areas.

About 40 cross country (XC) ski areas across the nation make snow and there is a significant chasm between XC areas that do and do not make snow.

High Point Cross Country Center in northern N.J. reportedly was operational for only one day last winter. Mountain Meadows in central Vermont never had enough snow to set tracks on the trails. Timber Creek in southern Vermont, a ski area operating for decades said that in financial terms it was the worst winter ever.

Craftsbury Outdoor Center in Vt. reported that the winter had the least snow in recent memory, but thanks to snowmaking, they were open for 131 days straight with a 12 to 24 inch base of machine-made snow. In years prior to snowmaking, the Center tallied only a quarter of the skier days in a good season compared to now because of snowmaking. The figures for this season appear to be close to last year’s record.

Craftsbury “inherited” quite a few races this winter from other ski area venues that did not have the snow. Their regular programming this winter served 1,000 school kids during January with schools using the area for fitness or outdoor education programs. There were a lot of school teams that traveled to train at Craftsbury because there was no snow in their home situations. The Craftsbury ski club program held regular practice, training, and racing. Many of these programs would have been cancelled without snowmaking.

Craftsbury also has offerings for seniors with regular visits all winter by a group of locals to stay healthy and active. Both indoors and out, they’ve become fixtures around the Center.

Snowmaking buffered the lodging too. It is projected there be less than an estimated 5 percent decline in lodging compared to last year. When that number is combined with frequent record days (in terms of receipts) at the lodge, it helped keep revenue flowing. Obviously, snowmaking has its costs that must be factored in, but the Craftsbury winter operation remained viable, keeping employees working and paid, and guests and visitors happy and engaged with Nordic skiing.

At Rikert Nordic Center near Middlebury, Vt. there were 8-10 days of skiing on natural snow, but they had skiing on 106 days during the winter due to their snowmaking operations. The skier visits at Rikert declined but the visits per day increased 15-20 percent and that is good for revenue.

Rikert provided team training and competitions that were pre-scheduled and they added a few races to substitute for ski areas that do not have snowmaking. Rikert’s Mike Hussey said, “In a typical year we use 4 million gallons of water and this year we were more like 5-6 million gallons. Finally in the end of February we said “uncle” with the snowmaking.”

They produce snow in the field and on some of the trails and they stockpiled the snow to move it when needed maintaining 2-2.5 kilometers of trails. “There were a lot of people putting in effort to make the snow.” Rikert’s programs such as Mom’s Monday, Toddler Tuesday, and the Bill Koch League for kids all were held as planned.

The Sleepy Hollow Inn Ski & Bike Center in Huntington, Vt. had a snowless winter in 2012 so the following year they invested in a snowmaking system. Owner Eli Einman commented, “We make the snow in piles and use the Pisten Bully to push it out along the trail to cover about 50 yards at a time, and then we keep doing that until we cover 1.2 kilometers of trail. We have ski teams from nearby high schools and St. Michael’s College that train here and we have booked our weekends with groups.”

Bob Frye at Cross Country Ski Headquarters in Roscommon, Mich. said, “We don’t need a lot of snow, just a covered cross country ski park with little hills and a 1 kilometer loop. The kids love skiing around on the hills and people are so glad to just be on snow – their expectations change when there is a snowless winter.” He stated that snowmaking helps bring income with lessons, retail and food sales, and it garners great local press, too.

Snowmaking is costly and labor-intensive for XC ski areas, but the areas in the east and central regions that invested in it during a year like the winter of 2015-16 were singing a happier tune compared to their non-snowmaking competitors at the end of the season. 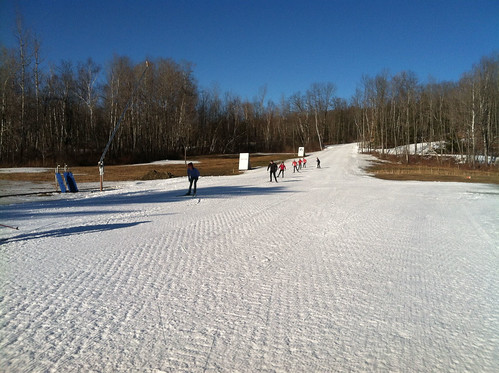