RealSkiers: Why Skiers Are Better Than Everybody Else 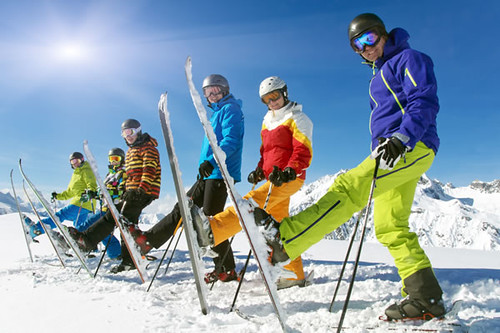 Skiers suffer. We endure countless indignities just to engage in the activity that allows us to say the hallowed words, “I’m a skier.”

We travel ungodly miles through weather that would force a Sherpa to turn back, discounting the obvious evidence of the treacherous conditions such as fellow travelers on either side of the road shivering alongside their upended vehicles – probably flatlanders out of their element we surmise – all the while declaiming that the visibility is fine, meaning there’s a small hole the size of a half dollar somewhere on the windshield that hasn’t been totally overwhelmed by the frost on the inside and the frozen glop outside that rendered the wipers inert 100 miles ago.

There is actually a stage beyond this, where the wipers turn into giant claws with stalagmites of congealed snow-mud-salt mixture growing up from them and stalactites of that same impenetrable substance growing down.

Grabbing the wipers while driving is good sport for a while, trying to snap the calcifying icicles against the windshield.  When this exercise fails one turns to God, Maker of goggles, which the driver then dons, rolls down the window, insinuates head sideways out same and continues on, matters well in hand. (When asked how the drive was, we say, “fine.”)

We haven’t even gotten to the ski area yet. There we will put on shoes the like of which no other sportsmen wear. Let us presume for the moment that they are comfortable, which is as justifiable an assumption as universal peace and harmony among all peoples. The boots are, regardless of comfort, credit-crunchingly expensive (unless they are cheap in which case they are worthless) and they are suitable for no other occasion.

Tennis shoes, after all, can be worn for moments other than tennis.  (Jerry Seinfeld shot an entire sitcom in them. Try that in ski boots.)

To prepare for the trial ahead, we warm up by closing our boots 30 times, each time increasing the pressure, straining to close every buckle until the shell distorts and we declare the job done, meaning no blood can possibly enter or exit the foot for the next six hours.

When we open the door to the day lodge, or more accurately, when it is ripped out of our mittens, we are met with winds that would have gotten Magellan around the world in a week. We learn that the Uber-lift isn’t running, something to do with the 6-person chairs being slammed sideways into towers; it’s hard to hear the explanation, due to the wind.

Damn this stupid mountain!  Anyone can see the weather is fine!  Now we’ll have to trudge up Dead Man’s Spine from the top of Blue Rectangle Ridge, which causes us more agita than the exfoliating wind that greets everyone who so much as steps outside.

Who else does this? Recreationally, I mean. Tennis players, up to and including the professional level, act more afraid of rain than the Wicked Witch of the West. Even football players, duly noted for their high pain threshold, stop the game when they can’t see diddley.

And the way we test our skills! No other sport parses their milieu with the fine blade wielded by skiers. We test ourselves turning quickly, kinda quickly, not-so-much and not-at-all, plus doing it upside down, backwards and any combination thereof.

We do it with feet attached to sliding devices independently or together, which we now call snowboarding. We cook through fall-line bumps that would send an X-Games biker to the clinic and launch airs higher than most experimental rockets fly with nothing more propelling us than our imagination.

Oh, and we can soar the distance of several football fields with our head between our feet or run across snow faster than anyone shackled to just shoes and if we’re so equipped, drop down and shoot the eyes out of a an owl.

To begin to match this measure of virtuosity, a baseball player – let’s choose Barry Bonds for fun – would have to hold the bat by his butt cheeks and swing at released pigeons.

Compare ski racing, for a moment, to the darling of the televised Olympics, figure skating. Frankly, how figure skating got past county-fair status is beyond me. Aside from sundry efforts at mincing around there is one dish on the menu, a spin, which can be multiplied several times to create the illusion of interest.

Shrewdly, the sport’s doyens gave this lone move several different names – axel, flip, toe loop, Salchow, who cares? - to break up the monotony. And boys and girls get to wear one another’s outfits, just like at Androgyny Camp.

Now, ski racing.  The slowest event, slalom, is like running through a knife fight, throwing yourself sideways to the pavement with each swoosh of a passing blade and back over to the other side in less than half a second, repeated fifty, sixty times.

In alpine racing’s downhill event, boys and girls go so much faster than your family car has ever gone, and they do it over terrain that no vehicle yet invented could descend at any speed. It is, over certain sections, impossible. Television cameras can’t capture the speed and terror because then no one would watch football. The difficulty of this sport can’t be easily conveyed, even by live pictures and sound, because it is unimaginable.

To be fair, every elite athlete suffers and many risk their lives in pursuit of their dreams. What separates skiers from others in this rarified fraternity is the immediacy of the danger; the skier is so exposed.

There’s no machinery, no artificial engine of propulsion involved, just planetary forces marshaled by the athlete’s skill, strength and daring. Skiers step into a stream that turns out to be rushing very, very fast, where they discover that still greater speeds are possible if only they have the will to attain them. This same exploration of the boundary between gravity and nerve is accessible to the recreational skier on every run.

The casual observer could be forgiven for not recognizing the connective thread that runs from the extraordinary talents of someone running in the first seed at Kitzbuhel to the remarkable absence of talent evinced by the “advanced beginner” in a death crouch, knuckles and poles skimming the snow, straight-lining the bunny slope, but it is there in that both are willing themselves to the edge of control, knowing that if they can just manage to keep pressure on the envelope of their ability they will break through to a higher level.

What skiing provides for both these exemplars of opposite ends of the skill spectrum and all points in between is the freedom to dare.  Nothing holds you back but you. (Well, the “advanced beginner” is most likely heavily handicapped with rental gear of indifferent fit and quality, which will certainly help to magnify the thrill at the expense of control.)

Freedom always has a cost, and for skiers the tariff is often paid in the form of injuries.  Some are dramatic, the result of a cataclysmic impact with the planet; others accumulate over time from an ill-absorbed cat track here, a badly managed bump run there, a missed landing now and again. If you give over any part of your life to skiing, you will inevitably learn terms like isolated anterior cruciate tear and laminectomy.

While sprained thumbs and dislocated shoulders are statistical fodder for those who study accidents, skiers tend not to count injuries that don’t disqualify us from skiing.  Even injuries that should sideline us often don’t if we don’t let them.

I’ve met lots of skiers with no ACL, or no knee cartilage or missing bits due to frostbite and all of them said they felt fine. I most likely encountered most of these skiers on some kind of lift taking us to serious terrain; no matter what parts they might have been missing every nicked one of them was heading back to the top, to heave themselves once again into that wonderful briar patch of variable conditions that prevail at the top of big mountains.

The shallow thinker, discounting all the evidence assembled here, might argue that skiers aren’t ipso facto superior; it’s rather that the sport attracts loonies who ignore most sensory input and have a low survival instinct. This is patently untrue.  Skiers endure despite pain they are all-too-conscious of (once they stop skiing).

The consequences of failure always lie just below the surface of any ski day and are occasionally brought vividly to life; they are not so much ignored as respected.  We discount the non-debilitating injuries and disregard the sometimes cruel whims of nature because nothing else in our lives can reach so deeply inside us, igniting a pure joy in living in the moment, of relishing the now, now, now of serpentine shifts over the earth’s fluffed-up skin.

And if the rest of humanity doesn’t get it that is certainly a pity but at the end of the day, you know what? That’s just fine.