RealSkiers: The Master's Secret Of Being Light 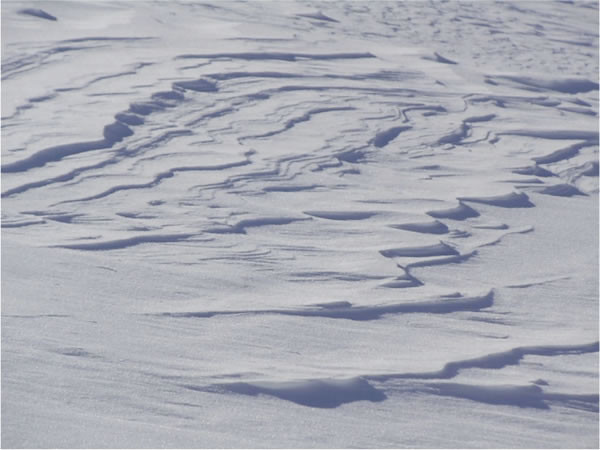 Mineral Basin, on the backside of Snowbird, is a bowl so large if it were any bigger it would be a lake. When storms move into this corner of Little Cottonwood Canyon, visibility collapses to a range so dense it should serve as the optical equivalent of Absolute Zero on the Kelvin scale.

Normally when conditions devolve to this degree, the Patrol closes the basin, but every so often the border remains open when only those gifted with inner sight can make out the terrain.

So let’s begin the lesson with the premise that you can’t see anything, and what you think you can see is probably a mirage.  Now let’s make it interesting.  The surface underfoot is wind-crust, formed by the current storm-in-residence that is wrapping up its engagement with hammering winds worthy of a Norse god.

The crust varies from gossamer to glacial, and there isn’t the slightest visual clue about which you are about to encounter.  Because of surface winds, when the rare glimpse of the earth’s topsheet is possible, it appears to be buckling and cracking underfoot like the last moments of Mordor.

Of course you could curl into a fetal ball and beg for redemption and immediate transport to another, less formidable world.  In our experience, this rarely works.  If you have a dear friend who works part-time as a crash-test dummy, send him first.   This simplifies matters immensely.  All you, Dear Follower, have to do is focus on the dummy’s feet [no pejorative undertones intended].  The feet will tell you all you need to know about the world in front of you.  You move as they move.  You put away the computer, Luke, and follow the flow of the feet.  Remember, you are the lucky one.

In front of you, the master has no feet to follow.  He can’t even see dimly through the darkness because for one thing, the darkness is solid white.  It is more impenetrable than any fog.  How does he ski this terrain that can’t be seen?

Because the master knows the secret of being light.  He also knows the mountain, so he knows the first turn may be so wind-battered it could be bone-jarring, yet just at the top of the second turn the antenna-tips of his skis tell him he has transitioned to windcrust, so he shifts his weight to his arches and concentrates.

What the master feels is the full length of his ski, every little millimeter, and he asks every little micrometer to hold up his weight, like a colony of ants holding a statue aloft.  He feels the entire surface and only when it is free of the crumbling crust does he shift subtly in the saddle and send the arc of his run back across the hill.

When you are light, you make no sudden movements. You are a stalking feline, keenly aware of every clue your senses afford where clues are hard to come by.  Your success depends on picking up the slightest cues from sound and touch and moving in concert with them.  The downhill pole becomes a feeler that probes the white darkness ahead, leading the upper body ahead of the arc, while the skittering bounce of the uphill pole’s basket reveals the pitch and yaw of the slope. You rise and sink with the pulse of gravity, waiting for weightlessness to facilitate your shift from to towards fro.

You can’t force windcrust to like you.  If you try to beat it into submission it will taunt your efforts and leave you upside down.  Like a confident lover, the top of the turn must be decisive but never forceful.  The weight shift is a matter of judgment and timing, all triggered by an intimate, tip-to-tail connection with the buckling terrain.

Why would anyone do this?  Shouldn’t they be having cocoa in the Fork Lift instead?  Because the mountain isn’t just one thing, it’s all the things it’s capable of; and to not know this mountain, this complete mountain, is to leave some of yourself behind.  There is ineffable magic in floating through a world that has disappeared, feeling comfort in the slice of your skis through snow that is entirely of the moment, gone a millisecond later.  Whether you lead or follow, you also are tethered to your companion, responsible for him or her, for in this world the pair of you are utterly alone.

The primary reason for heading down the gut of Mineral Basin in a whiteout is because on that particular day it offers the best snow with the least competition for its charms.  While the first 20 turns may be exercises in centering and sensibility, on the 21st turn a shaft of light may break through the grayscape and the fragile surface may turn to fluff just as you crest the next fall line.  Then the world and all that is in it is yours.

(The conclusion to On Being Light is posted on the realskiers.com home page.)