RealSkiers: The Eternal Stickiness Of Skiing 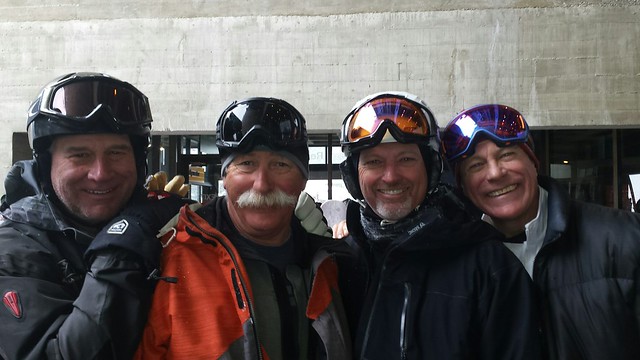 I’ve just returned from a five-day re-baptism in the gravity streams that cascade from the crown of Hidden Peak at Snowbird, Utah. It's an annual pilgrimage that re-stokes my passion, reaffirms my place in the world and reminds me of every reason why I ski.

We wouldn’t hold places like Snowbird so close to our souls were it not for the compelling people who populate the Plaza, along with those special wingmen who regularly reorganize their lives to share the ecstasy of flying down these g-force-generating slopes.

I first came to Little Cottonwood Canyon in Spring 1979 at the behest of my eldest brother Tim, even then a longtime habitué of the Rustler Lodge at Alta, to deliver a pair of Salomon’s latest bindings, the 727.

I was in the midst of my first year at the French marketing juggernaut, part of an experimental project in dealer education. Later that year I would travel to Annecy to work on a video project, get tapped to translate the in-house Boot Bible and by dint of this labor subsequently to instruct the U.S. field force in all matters relating to boots and feet.

Much has changed since then, of course; nothing and no one can withstand time’s relentless march. But what hasn’t changed is the remarkable ability of our sport to forge connections that endure as long as we continue to haul our bones to the top of some hill.

One of my touchstone connections with the Bird is the man who more than any other embodies the essence of the place, my co-author and personal spirit guide, “Guru” Dave Powers.

We’re not soul mates simply because together we wrote the most unusual ski guide ever committed to print, Snowbird Secrets. In fact, it’s the other way around: without the soul-to-soul bond inspired by this magnificent mountain, no such book ever would have found its voice.

Point being, I passed the better part of five days skiing alongside the Goo - and other friends unnamed, because, by prior arrangement, I agreed not to name them - but who, too, form part of the glue of personality that makes the ski experience so sticky.

Consider the case of what I’ll call the Forklift Breakfast Club. When Guru Dave suspends his six-day-a-week ski morning at 10:30 for a late breakfast, he never sits alone.

There’s a collection of gentlemen -none of whom could fairly be characterized as young - who convene there daily, all having already descended this relentless mountain several times before coffee.

I asked one of their number, who had been kind enough to lend me a hat for the week as I had idiotically left mine in a sink at home, if he ever tired of this routine.

“Every night before I go to bed I get excited knowing that tomorrow I get to wake up and go skiing here,” said the skier we shall call “Scott.”

“And I’ve been doing it for forty years.”

There’s self-awareness in his eyes and amazement in his voice, but Scott knows that tonight he’ll again tingle with the knowledge that he gets to ski another day. And Scott is not alone, for around the cluster of breakfast tables are similar stories of bonds that have lasted a lifetime.

The friendships ignited in this canyon in the decades since I first arrived at Alta in 1979 remain vibrant to this day, not least of which is the ski-rooted affinity with my brother.

Later that same year I would marry the love of my life, my sweetheart then as now, who understands that mountains provide ground for my feet and air for my soul, a climate in which friendships can bloom eternal.

Photo: The Dudes of Snowbird