RealSkiers: The 10 Worst Skis Ever 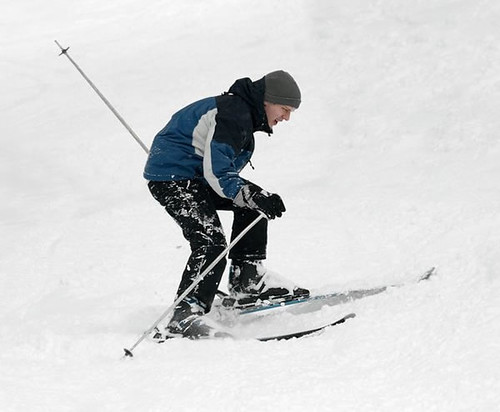 The New Year brings with it the opening of ski test season and the first public revelations of what new skis we’ll be putting through their paces in the weeks ahead.  As RealSkiers.com prepares to peer into the future, we pause for a moment to revisit past trials and tribulations along the ski test trail.

The list below isn’t meant to be definitive; we have no argument against adding other candidates.  Former maestros of SKI’s testing efforts, Paul Hochman and Seth Masia, upon vetting the original list, rushed to nominate the Fritzmeier skis of the mid-‘70’s that used fore and aft weights to impart long-ski stability on a short (170cm) chassis.  There are certainly many more at least as bad; we invite you to drop by the RealSkiers Facebook page and share your experiences with an unskiable ski.

Skiers are passionate folk who often fall in love with their charges regardless of their merits. We fully expect that some souls will loudly protest the inclusion of their favorite ski on our list of the most wretched.  In these instances, try to remember that it’s all in good fun, brush off your dismay as you would snow from your shoulders and take out any lingering aggressions on whatever ski you believe deserves public humiliation instead of yours.

10.Salomon BBR 8.9 – Created to facilitate “new sensations,” the Y-shaped BBR 8.9 mostly inspired puzzlement, despite a mighty PR push by Salomon that included both a media blitz and a direct-to-consumer travelling demo to whip up skier enthusiasm.  Good skiers regarded it as fatally underpowered and the concept failed to catch fire, fizzling after a few seasons.

9.Lange Ceramic  - The ski trade has long depended on the aerospace industry for its materials research, which has led to the successful adoption of aluminum, carbon and Kevlar.  Then there’s ceramic fiber, concocted to handle the enormous heat of atmospheric reentry – not normally a requirement in ski design - and stiff as an I-beam. Lange’s brief flirtation with ski making included a model so loaded with ceramic fiber it had the bending properties of a toboggan. But it was inflammable.

8. Hexcel Blue Ice – Perhaps weary of its skis’ reputation for getting deflected, Hexcel produced a model called the Blue Ice with a Bildner double edge (literally, one edge on top of another) and a honeycomb core of un-deflectable, utterly inflexible aluminum.  Skiers who experienced it once – only the brave ever tried it twice – were left scarred for life.

7.Kästle Carving Thesis – Kästle committed corporate seppuku with the 4-model Thesis series, all built with hollow tubes for cores. Claiming they were made in response to “North American dealer input,” no one has yet found a single dealer who requested an expensive, ugly, dreadful ski that in defiance of its name couldn’t carve its way through cream cheese.

6.Lacroix Soft Carbon – You have to admire the chutzpah of Lacroix in making a ski with all the coveted traits of a rental ski at a price so far above that of a first- rate race ski that it created cachet.  The money-to-burn crowd ate it up, never realizing as they slid through mogul troughs at 3mph that the skis beneath them had the structural integrity of a dollar-store lawn chair.

5.Olin MK I – Olin made the MK I in an unsuccessful effort to revive its plummeting fortunes by inspiring memories of the Mark I, the flagship model that had won the brand an instant following.  The most glaring flaw in this strategy was a unique design feature: vents in the sidewall, right under the foot, that immediately clogged the instant the ski was tipped into any substance in the snow family. The ski would deflect violently in mid-turn, but in Olin’s defense, only if used on snow.

4.Graves – Beware the ski made entirely from one component.  Just as Goode demonstrated the folly of an all-carbon ski, so Graves proved the limitations of an all-glass model.  Touted to last forever and with a lifetime guarantee to back it up, their durability was a double-edged sword: you were doomed to ski them forever. Heavy as a Mack truck but as pliable as a slingshot, they were an agreeable powder ski but only compared to the other skinny skis of their era.

3.Elan Stiletto – Just when most mainstream brands were adding wider skis to their lines, the contrarians at Elan concocted the Stiletto.  At 45mm wide underfoot, it required a bridge over the center section to provide enough surface area to attach a binding. The urge to be dramatically different drove Elan to sail well past the border that separates what can be made from what should be made.

2.Durafiber XR2 – Almost everyone who skied Durafibers during their heyday in the 1970’s remembers them with misty-eyed fondness. Their snow feel was unlike any of other skis of the epoch. So why are they on our podium of odium? Because their QC was abysmal. Not only were no two pairs alike, no two skis, ostensibly forming a pair, flexed alike. Put on a true surface, their warped bases would rock like a cradle.  Yikes.

1.Kästle B-52 – No ski failed quite so miserably at the business of making a turn as the unforgettable, omnidirectional B-52.  Its rectangular tip skidded over the top of any would-be turn, when the bolt-straight midsection took over the sideways drifting duties until the paddle-shaped tail could wash out.  The one thing this ski positively could not be made to do was remain on edge through any part of a turn, so naturally Kästle sold it as a carving ski. For this stunning achievement in design and marketing, we award the B-52 the honorary title of Worst Ski Ever.

Photo: Some of these skis could make even talented skiers feel helpless, like this.