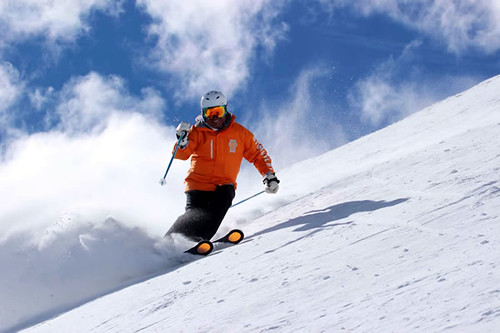 If you sashay into a ski shop, profess that you’ve been out of the sport for a while and ask what’s up with skis these days, you’ll be romanced about all the new technology that has transformed skiing in recent years.

Skis are shorter, so they’re automatically easier to turn. Skis are wider, so they don’t teeter so unsteadily. The front has been rockered – what we quaintly used to call “bent” - so even the inattentive can’t get their tips to cross. Camber, once considered a ski’s lifeblood, has been relegated to a patch underfoot or discarded all together.

If ten or fifteen years ago you couldn’t ski powder to save your life, you can now. “Technology” has bestowed footprints as wide as canoes, with baselines like rocking chairs. Such skis may have been intended for daredevils racing their own slough down a 50-degree slope to a 40-foot cliff drop, but that’s not who buys them.

All of the Americans who have procured skis over 100mm wide underfoot in the past several seasons haven’t magically become more proficient, they’ve simply been better abetted at masking their mistakes. Powder skiers who don’t deteriorate after an hour of wrestling the depths of heavy new snow aren’t any stronger than they were the season before; they’re just surfing on a broader beam that lets them skim unperturbed across the surface.

For the last five years, skis with any hope of appealing to the general public have been modified in every way imaginable to reduce the requirement for technical proficiency. It’s a variant on the old, “if you can’t beat ‘em, join ‘em” axiom: if you can’t teach them, accommodate them.

It’s instructive to note that quite the opposite demands are placed upon skiers at the sport’s highest level, World Cup racing. Courses are set with turn radii inherently tighter than any allowable ski, requiring the racer to exceed the technical limits imposed on their gear by their sport’s overseers.

Skiers who can figure out how to extract a 20m-radius turn from a 30-meter radius ski at 50 mph on snow harder than your kitchen counter don’t find off-piste conditions at 40 unnerving. Even on their race skis.

And thus has it ever been so.

One generation ago, a scant 25 years, race skis and off-piste skis were one and the same. I recall a Rossignol new product introduction at Val D’Isère in 1991; we had two great days of fairly wet snow and spent every second on GS race skis. Never mind that Rossi was trying to launch an ill-fated slalom spin-off of their crazy-popular 4SK; any attendee with any chops grabbed a 7G and a guide who shared the itch for uncut snow.

Returning to the present day, the current Grand Illusion is that the average American benefits from the New Technology and so skis better. Something like the opposite is true: all the New Technology is designed to sustain the perfectly ordinary illusion that the typical American skis better without improving their skills one iota.

A corollary of the Grand Illusion is that Old School, narrow skis can’t navigate all the wild terrain accessible with today’s wider planks.  Nonsense. Where a ski can travel depends entirely upon who’s wearing it. Skiers with skills don’t balk at a gallop through the trees because, “Oh, I can’t – I’m wearing the wrong skis!”

While it probably seems heretical for a ski review purveyor to suggest that ski selection isn’t a life-or-death decision, the fact is that great technique conquers all.

The point to remember, Gentle Reader, is that while great technique conquers all, great technique is not accessible to all. Boots that are too big, skis that are too wide or too tall or too loose to learn what a carved turn at a high edge angle feels like prevent even the most adept athletes from developing their skills.

So it does matter indeed what you have on your feet. But new ski technology probably won’t help you actually improve as much as cultivating the technique that defines the gulf between good skiers and great ones.

At realskiers, we focus on the interrelationship between technology and technique.  It’s our conviction that carving skills form the proper foundation for great skiing, which is why we’re the only independent site to provide instruction from two of America’s foremost teachers, John Clendenin and Harald Harb. A few minutes of their wisdom will do more to increase your skiing pleasure than any new skis you can find.

Photo: Hall of Famer John Clendenin, seen here on the slopes of Portillo, Chile, happens to ski on Kästles, but he would still look good skiing on rental skis.