RealSkiers: Swap 'Til You Drop 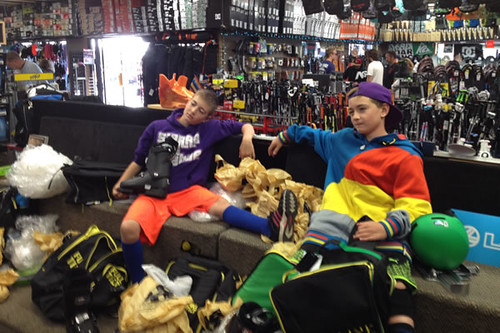 Outfitting an adult of limited experience in new gear, as I had the great pleasure of doing again yesterday, easily runs to a grand, and that’s without a stitch of clothing above the sock level.

Anyone with even a patina of expertise will inform the uninitiated that boots are their most important piece of equipment. What they may fail to mention is that a ski boot worthy of ownership will run $300 at a minimum, on sale. And you still don’t have skis, bindings or poles. You’ll find plenty more information at RealSkiers.com

Before you rush off to the Internet in search of leftovers, retreads and castoffs, see if there’s a local ski shop, ski team, club or youth program that’s sponsoring a swap. When it comes to the secondary market, the swap offers the old-fashioned virtue of being able to hold the item in one’s hand or on one’s feet, rather than the all the unknown evils that lurk in the digital swamp.

Boots that cost over $700 in their infancy can sell for less than $100 with plenty of mileage still on their treads at the typical ski swap. Will they fit like new boots? Of course not.

But drop in off-the-rack, trim-to-fit insoles to take up the slack created by prior usage and some semblance of the original fitting properties can be recovered. The $40 insoles may cost as much as the boots, but they’re well worth doubling down on your fractional investment.

Old skis are even easier to revive than used boots. Nothing brings skis back to life like a fresh base grind, re-set edge angles, proper waxing and hand finishing.  The cost of such rejuvenation, while substantial, is your best investment to ensure that your bargain will be brilliant, not bogus.

The wild card in the used equipment deck is the binding.  Every binding extant has an inherent expiration date. It doesn’t matter how well it’s been preserved; after a couple of decades of exposure to reality, insurers will no longer cover a given generation of bindings.

The lesson to sellers is to move your less-loved skis before the bindings that adorn them approach their expiration date. The lesson to buyers is to closely inspect the binding on any “too-good-to-be-true” used ski buy. In some cases, you may not be able to locate a ski shop, at least in this country, willing to adjust them.

If your total equipment budget for an unequipped adult is $400 or less, you’d best be fishing in the used-gear pond. A suitable boot will be the hardest item to find but offer the greatest potential savings, as $100 is pricey in used-boot-land.  Finding a great ski/binding package for under $300 is trickier, but doable with diligence.

Often the quest for greater savings can lead to unfortunate purchases inspired more by hope than wisdom. The best defense against buying a dud lies in knowing what you’re looking for in the first place.

If you’re shopping for used boots, at least learn your correct size in the metric system known only to ski boots (e.g., 27.5) and have some idea of a suitable stiffness, loosely indicated by the model’s flex index (e.g., 120, which would be a relatively stiff flex).

If you’re trolling for a used ski, narrow the search to skis of an appropriate length - determined by the skier’s height - and width, which is the decisive factor in model selection.

In the anything-goes world of the ski swap, the well-informed consumer has an excellent chance of finding a gem; the lost and misguided aren’t likely to be so lucky.

The difference is education. There’s no more authoritative, independent source of information than realskiers, where anyone can take a crash course in how to be a better buyer.

Photo: Swaps are great, but be aware. (RealSkiers.com)