RealSkiers: Saving Skiing One Skier At A Time 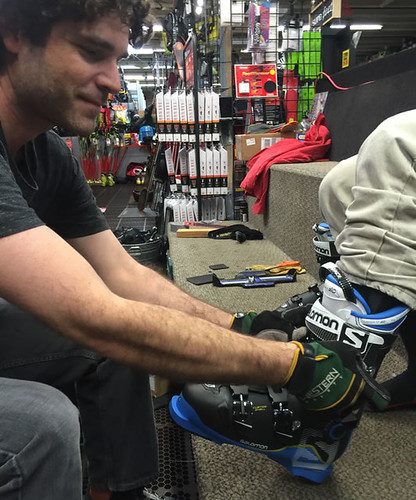 This week the American branch of the world ski market reconvenes in Denver at the annual Snow Industries America show.  While the engine that drives the show is commerce, its machinery is oiled and fueled by personal relationships that are often decades old.

Given the family reunion atmosphere, it’s only appropriate that we take a moment during this mega hug-fest to reflect on the state of the sport we all love so deeply.

To help stimulate your thoughts on the subject, allow me to relay the story of a single bootfitting episode from this past Sunday.  I was in the back shop applying some love to my Bonafides’ bases when a fellow bootfitter called me to the bench to help with what looked to be a challenging fit.

A minute later I was sitting in front of the client we’ll call Brian.  A fit man who looked to be in early 40s, Brian was a snowboarder who wanted to get back into skiing, but his first stab at the sport a few days earlier wasn’t promising.  If I couldn’t help Brian, he most likely wouldn’t ski again.

If this wasn’t motivation enough to find a solution, Brian’s unique condition more than doubled my resolve. Brian had suffered a traumatic early childhood disease that permanently altered the development of his right lower leg and foot.  His right leg was an inch and a half shorter than his left, his right foot more than a full size shorter than its mate and his ankle was a hot mess of re-wired nerves and mashed vessels, with permanent deformity to the lateral ankle bone.

Furthermore, his shin was sensitive to the touch, with some pockets of swelling bordered by deep indentations running up and down the calf.  His ankle range of motion was, not surprisingly, limited, although he could plantarflex enough to put a boot on. And he had a protruding first cuneiform with the circumference of a fifty-cent piece.

I told Brian if he had the will to ski then together we would make it happen.  Brian, God bless him, placed his trust in me.  Now, I thought, what the hell do I do?

First, we talked some more about his condition, how he compensated in other activities, what sort of pain he felt on his one recent foray on the slopes and other aspects of the affliction.   Then it was time to fetch a boot.

I wanted to begin with a neutral, middle-of-the-fit-and-flex-spectrum structure that would also provide me with the malleability needed to house the battered right ankle.  I had to fit for the longer, normal foot and figure out how to secure the shorter, damaged one.

It took a few tries to find just the right combination of underfoot support and elevation beneath the short leg to position Brian so we equalized pressure all along the shin, eliminating his pain there, and held him in a more forward position where his limited range of motion could be most effective.

An insole interlocked with Brian’s arch to help hold the foot back and improved biofeedback from his soles to the rest of his balance system.  His feet were feeling more like twins than strangers, and even his knees were tracking properly as he flexed.

All that was left to do was heat-mold the shell for the ankle, the top of the arch and distorted lateral aspect.  When finished, there was some residual pressure on the front side of the swollen ankle, which was relieved with an isolated punch around the hinge rivet.

In all, it took about ninety minutes (plus cooling time) to build a foundation that allowed a skier to come home and be reunited with a sport he loves.

I went on to fit many more skiers that day – it’s been a crazy year – but none more satisfying than Brian.  I give an avalanche of credit to him: he shared a history he knew all too well, allowing me a clear window on how he adapted to his condition.  Throughout our process he exuded cheer, good will and gratitude.  He was more than just an attentive customer and good listener; he was a mensch.

Why do I share this story with you now?

Because now more than ever, every skier counts.

Which is why genuine bootfitting expertise is one of the pillars of our sport.

There is only one way to retain skiers like Brian, and that’s by supporting the specialty retailers who spend the time to do this vital job properly.  Great skiers know that they can ski any ski but they can’t ski in just any boot.  Less than great skiers need this help more than experts do, yet little by little, year after year, market forces erode the foundations of the specialty retailing channel that serves them.

I encourage all the friends of realskiers, whether you’re heading for Denver this week or heading for the slopes, to support your local, family-owned specialty retailer.  They can make such a difference in your ski experience, if only you let them.