RealSkiers: Our Picks For Best 2015 Skis 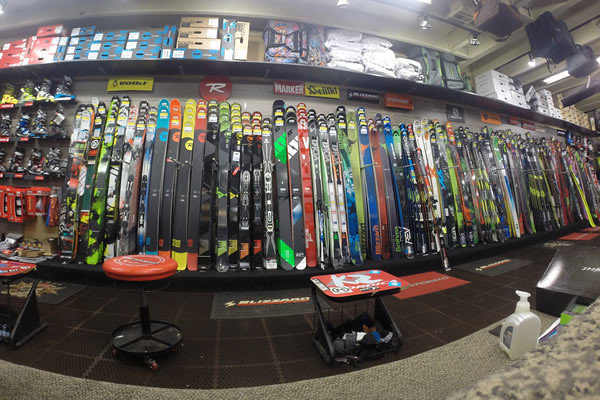 What a wonderful time to be a skier.  No matter where or how you like to slide, there is a ski made just for you; the ski market has never displayed so much diversity in shapes and baselines, from hourglass carvers to battleship-wide smear-sticks.  About the only shapes not currently available are the ancestral dimensions of long and skinny.

With so much choice available, to select only one ski as a favorite seems not just uncharitable but objectionable.  What’s best for powder is not best for bulletproof conditions; a great mogul ski may not be so terrific in crud; an immaculate unisex ski might be anathema to lightweight women, and so on.

To acknowledge and embrace this rich variety of available sensations, each tuned to a slightly different application, realskiers is selecting several favorite skis for the 2015 season. These skis aren’t necessarily the highest scoring in their respective categories across our entire test panel, but they are the ones that made the most distinct impression on our editors as exemplifying the best qualities of each genre.

When we bundled together some of the best “citizen race” skis for an on-snow evaluation last spring, we didn’t expect skis with real race genes to be forgiving enough to be everyday rides. Boy, were we wrong.  We found a lot of loveable thoroughbreds, including both of Völkl’s race ponies.  The ease and grace of the SL model was particularly eye opening on a ski so swift edge to edge, while the GS displayed limousine smoothness at racetrack speeds.

Close your eyes and pick one.  No matter what width waistline you opt for (80mm, 76 and 72, respectively), you’ll be on a kick-ass ride.  Literally. The piezo-powered fibers in the tails of these Head models stiffen when stimulated, giving a boost to your backside as you rocket out of the turn.  Many near-experts have trust issues when it comes to dropping their hips into the turn on hard snow; these iSupershape models instill the confidence to lay them over and hit the gas.

The Kästle MX 88 is so gorgeous I could extol its virtues in verse, but I’ll spare you the doggerel and get to the point: it doesn’t just carve a clean arc, it flows over terrain with such fluidity you barely notice you’re going 50mph. Yes, it favors the technical skier who is comfy at a high edge angle, but what truly great ski doesn’t? This same magnetic edge hold is also found on the fatter MX 98 (new this season) and the equally seductive MX 83 for those who want a slightly snugger turn radius.

Skis in this category are the fattest skis that don’t feel fat on the snow, creating a behavioral envelope that encompasses everything from hardpack to knee-deep, cut-up powder.  Among the many stars in this corner of the ski firmament, the Blizzard Bonafide continues to shine brightest because of its delightful indifference to snow conditions. Its clever baseline design deploys the entire edge when the ski is laid over, and its subtle sidecut enables it to slice through uneven snow on an even keel.

I don’t normally gravitate towards double-rockered twin-tips on relatively narrow skis, but I have to admit the K2 Shreditor 92 was a ball to ski in every terrain encountered. It was particularly facile as a bump board, for the pilot can swivel it around any obstacle and the friendly baseline follows terrain rather than resisting it. Mankind wasn’t meant to live by carving alone. The surfy Shreditor 92 is about fun and fooling around in loose snow and it thrives in irregular terrain where carvers fear to tread.

The Cochise has been turning heads since its debut for its ability to motor through crud unperturbed.  Unfortunately, this attribute was only accessible to those willing to amp up the mph to roughly 40, a relatively small demographic. So this season Blizzard pared down the Cochise core profile, making it about 15% softer.  Now that it’s able to bow at a more relaxed pace, the Cochise is an even better tool for any time the snow is choppy, as in runs 3 – 15 on a powder day.

A Powder ski in its native element is all about shape and flex.  SkiLogik’s sublime Rock Star is a contrarian on both counts. Most Powder skis focus on creating the most surface area, often slicing sidecut to a minimum, reducing the ski to a pivoting plank that is buoyant if nothing else.  To make the ski easier to swivel, tips and tails are both rockered and softened.  The Rock Star, while plenty wide, retains a tight, 14m radius sidecut, so it cuts across the fall line with greater ease, without resorting to swiveling.  The tip and tail are stiffened so they don’t wash out on big landings.  This clever combination of traits earned the Rock Star our highest rating for Powder.

With its über-rockered baseline, the Völkl Shiro looks like it would have the directional stability of an overturned turtle, but it blasts through deep snow exactly as aimed.  The whole reason to own a ski this wide is to make the exercise of skiing thigh-deep snow easier; the Shiro is so simple to pivot in the fluff it’s almost effortless.   The energy conservation the Shiro enables adds up to several more powder runs on a day that would drive you indoors on a less supportive ski.

While we at realskiers maintain that what makes a great mogul ski is a great mogul skier, if there’s one ski attribute that facilitates snaking through bumps, it’s maneuverability. No other non-race ski on the market has the mongoose-quick reflexes of the Head i.Supershape Speed, enabling it to slither through tiny trenches without coming unglued from the snow. It’s one thing to survive a long mogul run; it’s another thing to make it look easy.  The i.Supershape Speed does the trick.

Materials don’t come any thinner than by the molecule, which makes infinitesimal Graphene™ as light as any structural substance we’re likely to see.  Graphene isn’t all that goes into the make-up of Head’s new Great Joy, but it’s the difference maker.  Never has a ski this light and supple underfoot felt so serene on edge.  The sensation of the ever-changing snow surface seems to shine through the ski, feedback normally muffled by heavy slabs of wood and metal.  For once, women got the sexy new technology first.  Lucky them.

Photo: There is plenty of choice for 2015 best skis (real skiers.com)