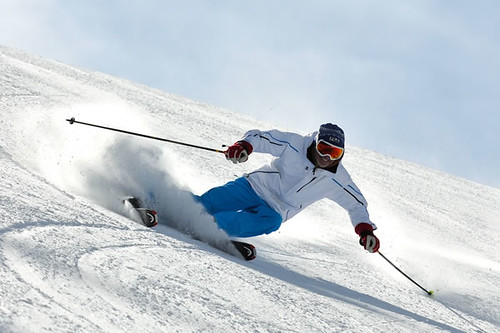 Among the many ways to define the boundary between good skiers and true masters is that the former tend to be obsessed with technique (the better to breach said boundary), while the latter rarely, if ever, think about it. We think about it often here at RealSkiers.com.

Great skiers just go skiing. They step into gravity’s stream with unselfconscious ease and disappear into the moment. They become the flow, beyond the reach of monkey chatter.  Being and action converge.

Therein lies the inherent Catch-22 in the quest for greatness: by definition, those who ski in the flow know how to access it, while those who don’t are repeatedly frustrated by their inability to “technique” their way into the élite.

The irony of course is that greatness absolutely requires superb, ingrained fundamentals despite the fact that the practitioner is utterly unconcerned with them during the course of his or her descent.  When the skier is in the flow, mechanics are assumed and subsumed in the skier’s movements.  It isn’t so much being in this state as getting into this beyond-technique attitude that presents the ultimate hurdle for the expert skier.

Making the transition from repeating mechanics to skiing in the flow requires respect for gravity’s power even as one surrenders to it. It entails skiing from a balanced core that feels connected to the invisible stream that courses down every mountainside.

It involves imagining not just the next turn but the last turn, projecting one’s energy towards the bottom in communion with gravity.  It is play elevated to the level of spirit, providing a portal to connecting with power and knowledge both primal and eternal.

Stepping into the flow isn’t about a mechanical move but an attitude that frees the mind to focus on sensations. You don’t think your way down the hill; you feel your way down. Thought is submerged at a subconscious level where it can operate all the machinery without an internal autocrat barking instructions from above.

It’s not as though the mind and body were totally disconnected, but rather so totally connected that they meld into a cohesive unit.  The conscious mind could take a complete vacation were it not for the occasional tree, sudden change in pitch or a need to stick with friends who just went thataway.

For a freeskier, there is no higher aspiration than skiing in harmony with the hill.  When the confluence of man and mountain forms a seamless connection, the sensation that surges through the soul is a joy so intense it brushes the lips of love.