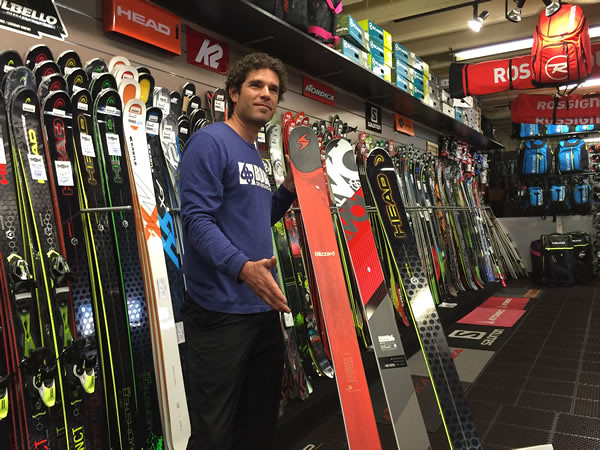 To familiarize prospective first-time-in-years ski purchasers with today's altered landscape, we’ll walk you through the Q & A of a current ski sale. Let’s assume in this example that you’ve already confessed to having no idea what’s right for you in this brave new world and have asked a reputable salesperson to clue you in.

The competent pro will begin by describing the big picture and then proceed to whittle away at the ski wall until only one or two models are left standing. In this respect, ski buying is a lot like a game show.

Your emcee, the salesperson, will set the stage by explaining that the ski world of 2016 is sorted first and foremost by waist width. The reason we categorize skis according to their widths underfoot is because this measurement tells us a lot about the terrain in which this or that sort of ski excels. To oversimplify, wider skis like deeper snow; narrow skis handle groomed conditions better.

Now begins what can become a lengthy dialogue about where you ski and how you ski. On the first point, be as specific as possible: name runs and conditions you like. On the second point, be honest; No extra points are awarded for overstating your skills. Quite the opposite . . .

If you’re like most skiers, you’ll end up saying that you can handle all conditions to one degree or another and want a tool that will let you ski the whole mountain. This eliminates both the narrowest and the widest skis from consideration. Your emcee is getting a clearer picture of what will serve you best, but terrain preference isn’t the only criterion.

It’s time for your host to probe deeper into your purported skill set. There’s more than one style of expert on the slopes, the key differentiator being how comfortable the skier is with skis at high edge angles and feet well out from beneath the center line.

Advanced skiers who keep their feet under their shoulders will find a less aggressive ski more suited to their pace of play. While we’re on the subject of self-assessment, contestants should be aware that enduring a run designated as a black diamond does not confer expert status upon the survivor.

We pause here briefly while we point out a key consideration. There are today two distinct families of skis, those with some designs on carving a continuous arc and those that pivot and/or smear sideways to control speed and direction. If the tips are twinned, it probably swims. We now return to Let's Buy a Ski!

By now your emcee has learned that you ski 70 percent of the time on-trail in the East and 30 percent of the season at western resorts where you’d do more off-piste terrain if you were better at it. You consider yourself advanced, you don’t like bumps and hope to ski 40 times a year but usually get in only 20. Your current skis are K2 Apaches, which you plan to keep. Your boots are 3-year old Salomons.

Okay, let’s see what you’ve won! But before we unveil our finalists, let’s re-cap our contestant’s responses as evaluated by the ever-alert host.  His internal monologue:

“From the first exploratory questions it was clear our contestant could either continue with a Frontside ski around 80mm at the waist or consider a slightly wider All-Mountain East model to improve off-trail performance.   He’s a Finesse skier accustomed to a forgiving ski. The one week he gets out West is awesome but humbling.  The boots, BTW, are actually five years old, but this is only a half-point deduction.

“Our contestant is a traditional, recreational skier who would like to widen the path of least resistance. He’s not into mighty exertions (bump aversion duly noted) and wouldn’t mind a light ski that did most of the heavy lifting.”

The first option our pro proposes is the K2 iKonic 80Ti, an upgrade over the old Apaches, for sure, but still cut from the same, ridiculously-easy-to-ski cloth.  However, since the problem we’re trying to solve is better off-trail performance over the arc of the next ten years, the slightly wider platform of the iKonic 85Ti will boost off-piste confidence.

An alternative tack is a Frontside ski with an off-piste personality, an unusual amalgam embodied in the Blizzard Latigo, that allows you to ski comfortably in both worlds.  You might even learn to like bumps.

Now that we’ve reduced a wall of skis to two models, it’s time to select your size.  You’re a healthy 180 pounds spread over a 6-foot frame; a 177cm should be enough to support you but not too much to trip you up.  And the final model selected is…

Sorry, but we’re out of time!  Until next time, be kind to those less fortunate, tip your waiter or waitress and remember: skis, like boots, should be properly fit by a trained professional.

It never hurts to get the job done right.

Tweet
Lake Tahoe Resorts Shrug Off Pessimism, Ready For ...
Loveland, A-Basin First Out Of Gate As Colorado Re...