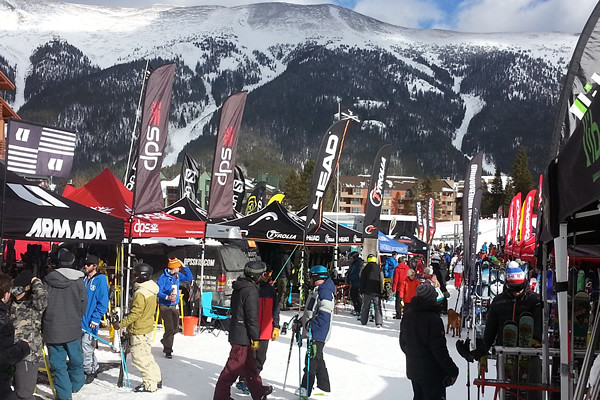 As I pen this piece, two events of singular importance to the ski industry are unfolding a few miles apart at either end of Vail Pass: the 2015 Alpine World Championships debut in Vail/Beaver Creek while the national Snowsports Industries America (SIA) On-Snow Demo concludes at Copper Mountain.

The thread connecting both of these celebrations of our sport to realskiers is that all three entities are dependent on ski testing for their success.

Elite racers routinely must sort through over 100 pairs of skis – per discipline – to find their favorites.  Ski shops attend the On-Snow Demo for the express purpose of evaluating all the new gear for the season to come.  And realskiers is laser-focused on providing the best ski and boot assessments extant.

The consumer analog to all this testing is demo-ing new skis to find the perfect match among the thicket of possibilities. If industry insiders try new skis before they race on them or stock them, surely the savvy consumer should employ the same methods?

There’s a huge gulf between the experienced racer and a two-weeks-per-year skier. The racer’s superb skills are ingrained and operating unconsciously while recreational skiers still have to pay attention to their skiing while trying simultaneously to parse the performance of the new skis underfoot.  This is an all but undoable multi-task.

Racers own another huge advantage over the recreational skier in this endeavor: they know exactly what they’re looking for and have the objective measure of time to bolster their subjective impressions of speed. While ski shop personnel who aren’t ex-competitors generally lack the precision the race community brings to the party, they still usually have many years of experience testing skis and so are more keenly aware of what attributes they’re looking for.

Just as importantly, the best specialty shops understand the pitfalls of jumping from ski to ski to ski when countless small variables go uncontrolled.

Even skiers who self-classify themselves as “experts” are usually unable to detect nuances that can render the playing field wildly unlevel. The most obvious obstacle to a clear read of any ski is its base tune and edge finish; when these surfaces are not optimized and/or standardized, direct comparisons among skis is a game in which every card is wild.

The binding, a component that most consumers assume is a neutral player, is anything but. The demo binding, whether it’s an integrated, so-called “system” set-up or mounted on a flat ski, can be raked forward, slightly tilted, flat or even toe-high.

This has an astounding impact on how any given skier applies force to a ski, comparable to what adding a custom insole does to one’s boots.   If every demo binding you try is as different as the skis they’re mounted on, just what is it that you imagine you are testing?

Let’s consider for a moment the terrain you’re using for your test lap, assuming, of course, that you ski the same run over and over, switching skis every run to avoid adapting to the ski instead of rating it, recording results as you go.  It should include a short mogul section, as what skier doesn’t want to know, “How is it in the bumps?”

But facility in hard bumps, aside from demanding hard-won technical proficiency, is also dependent in part on a ramp angle between heel and toe that’s ideal for moguls but that can be a hindrance to heel pressure on flatter surfaces.  All you have to do is place a heel lift in your boots to form a different impression of a ski’s mogul-friendliness.

We mention all these variables that bedevil the less skilled skier’s attempts to assess a ski not to discourage all skiers from every demoing again, but to evoke an understanding that nuances in ski selection are every bit as precise and as important as the finer points of boot-fitting.

Just as we have always encouraged realskiers’ readers to find the best bootfitters they can and place themselves unequivocally in their care, we strongly advise skiers looking for new skis to seek the services of specialists who understand our sport down to their bones.

With specialty retailing under siege in this country, great “ski fitters” are becoming as rare as great boot fitters, but they’re still among us and more than worth seeking out.

Take the example of Pierce Skate & Ski in Bloomington, Minn. They go to the length of inspecting the ramp angle on every ski they test, and they test every stick they sell to a fare thee well.

At Footloose in Mammoth Lakes, Calif., world-class boot fitting skills are complemented to an in-depth understanding of how boots interrelate with the other components of the ski-boot-binding-human system.

Jan’s Mountain Outfitters in Park City, Utah, has a staggering success rate with their ski demo program because their customers have learned to put their faith in their counsel and let the shop personnel guide the test experience.

Shops such as these are national treasures for the skiing public. The next time you’re looking for a ski that will improve your precious ski time, don’t just look for a popular ski. Look for the best ski fitter available and pay heed to his or her counsel.

Photo: There are plenty of nuances in ski selection (RealSkiers.com)