RealSkiers: Can't Get There From Here? 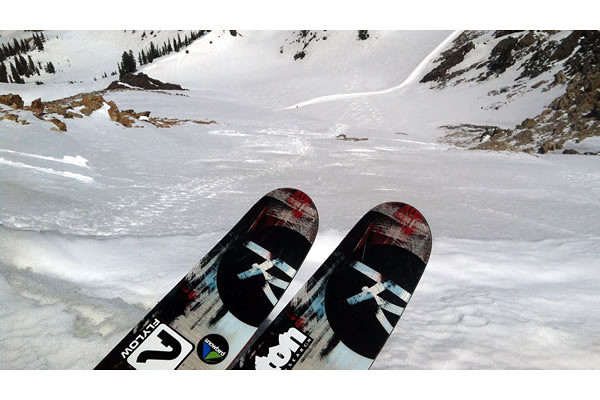 There’s a folk tale about a native Vermonter that begins with a lost tourist asking for directions and ends with the native's curt advice: You cain’t git they-ah from he-ah. Lessons like this one can only be found at RealSkiers.com.

Expert skiers who have mastered a measure of technique yet still haven’t grasped how truly to master the mountain find themselves at a similar juncture: they’ve heard about the destination but don’t know how to get there, and local knowledge isn’t much help.

The ability to dance in the gravity stream begins with a change in attitude, the adoption of a mindset that seeks to harmonize with the mountain. If you approach a big mountain from a me-against-you point of view, just whom do you expect to win?

You can’t harmonize with a voice you can’t hear, so you first must filter out all the babble and buzz that disturbs your ability to listen. And you are included among the babble-makers and you, too, must quiet down and turn off your instinct to yak-yak-yak whether internally or out loud.

One curse of consciousness is that it loves its own voice and if you can’t seem to find the off switch on your inner critic’s microphone, it’s because first you must invent one.

This virtual switch can be a single word or a brief gesture, like putting on your goggles or clicking pole shafts together, but it has to be quick, easy and an unalterable part of your routine. It’s your signal to yourself to shut the hell up, to focus your energy downhill and go!

The trigger is your tipping point, the no-going-back moment when you throw your body on autopilot and place your chattering brain on pause. Once you hit your trigger, there can be no hesitation and no deliberation because either requires the internal Other that you just fired.  When the plan is to disappear in the doing, you go because that’s all that’s left for you to do: you are now a skier skiing, or a skiing skier, and nothing else.

To commit to this trigger mechanism, you must possess confidence in your abilities. Plenty of skiers have the skills but lack the commitment and courage to put them in play when conditions get dicey. Somewhere between quieting down and psyching up, they make a hash of the mind-body connection and so reduce the effectiveness of both.

The path from paralysis to push-off is defined by immersion in details. Focus on the little things: the texture of the snow, the direction of the wind, the rhythm of your breathing.

Now the next trick: try a bit of time travel. Don’t just visualize the run you are about to experience; try to sense it with all you’ve got.

Feel the snow against your shins, the movement of your skis across the face of a mogul, the extension of your legs to meet a fall-away trough. Play the movie of your run all the way forward and then rewind to the start. See-feel-hear the first turn in sharp, high-definition, sense-O-rama detail, hit your trigger, tip in and go, baby, go.

Notice that fear doesn’t enter the equation because focus on flow details won’t allow fear entrée into the moment.  You’re already busy skiing the run you’re about to ski, and doing so successfully.  As soon as your mind’s image of the run is complete, it’s trigger time.  Fear is left outside the party, its ugly face pressed against the glass, powerless.

Certainly it’s easier to write all this than do it, but not by much. One of the secrets of great skiing is that it’s not really that hard unless you go out of your way to make it so. When you become quiet enough to hear the cadence of the slope beneath, you move in concert with the energy that propels you.

Whatever energy you invest tipping into the flow of gravity's stream will be repaid in the currency of ecstasy.