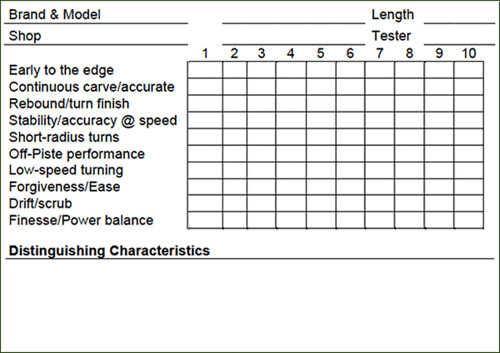 T’is the season we in the ski evaluation racket look forward to all year, when we can take run after run on new ski after new ski, soaking in the sensations each ride imparts.

It’s also the peak of the winter season, when members of the general skiing public have their best opportunity to try a new model before committing to a budding ski relationship.

While almost every skier extant would love to try a new ski, when given the chance practically all of them go about it in a haphazard way. In other words, they just go skiing.

But skiing and ski testing are two distinctly different exercises.  Let’s take an imaginary test run and see how it differs from a recreational outing.  Before we do, let’s revisit a few critical caveats.

For starters, if you’re not in a fundamentally balanced stance in a properly fitting boot, you’re wasting your time “testing” skis. I put “testing” in quotes because if your boots aren’t spot-on, you have no way of knowing which end is up. You may prefer one ski to another, but it will have as much to do with your mood as with the suitability of the ski.

Secondly, when evaluating more than one model try to stick to the same run and, as much as possible, the same gamut of conditions.  If you repeatedly change your test track you’re going to make a muddle of your impressions.

Your last act before taking off on a test run is a trigger mechanism that is your signal to yourself to shut out all distractions and focus on the sensations ahead.  I click my poles together to turn on “test mode,” but the trigger can be any word or gesture that tells you to focus your energy and stay on task for the next few minutes.

So, with a click of my poles, I’m off.  For the first few seconds I ride the lightest of edges, letting speed build naturally.  If the ski tune is miserable or the balance point is off, the dreadfulness will be evident in the first 50 yards. If that’s the case, your test run is over before it’s started.  You can’t read a ski from the wrong stance position and you certainly can’t rate a ski that fights you all the way down the hill.

Once I have a little pep in my step, I want to set as round a long turn as I can and focus on how early the ski connects at the top of the turn, how well it holds a consistent radius through the middle of the arc and how much energy it imparts as it finishes one turn and transitions to the next.

After a few long, cross-hill arcs, it’s time to tighten up the turn radius. How hard do I have to work to spool out mid-radius turns on groomed terrain?  How accurate do I have to be? When I segue to short, fall-line turns, will the ski do as instructed or will it resist cutting a tighter radius?  Does the ski whip me into the next turn or just lay there, expecting me to do all the work?

Somewhere in my run I’m going to find some bumps by the side of the trail that the grooming fleet ignored.  It only takes a few turns in moguls to find out if the ski has any facility for following irregular, off-trail terrain.  If there’s a little crud in the mix, all the better.

Having decelerated to make some slower short turns, it’s time to pick up the pace. As I gain speed, I become more aggressive, spreading my feet apart and using more hip angulation, eventually driving with legs extended on every arc. I try to find the point at which the ski becomes unstable.

To scrub speed before the lift maze, I drift to an edge in long turns, then hook up, then drift, checking for the ease with which I can control edge angle mid-turn.

When I finally come to rest, I should know how the ski behaved at the top, middle and bottom of every turn shape from short to long, its handling at speeds both fast and slow, some idea of its terrain versatility and ease of operation, and if it’s best suited for Power skiers who ski at high edge angles or Finesse skiers who usually keep their feet between their shoulders.

Use A Test Card

If that sounds like a lot to keep track of, it is, which is why serious ski testers record their scores and impressions on a test card like the one shown here.

To clarify a couple of the more obscure criteria, Off-Piste performance includes all ungroomed terrain, including moguls, trees and cut-up crud, not just the all-too-rare fresh snow.  Finesse/Power balance asks the tester to rate how well the ski serves both the highly skilled, athletic skier who skis comfortably at high edge angles and the less aggressive soul who, while skilled, rarely allows his or her feet to travel too far from the center line.

A professional ski tester will repeat this sequence anywhere from 12 to 20 times a day, annotating each scorecard with the salient impressions left by each ski.  The prospective ski buyer would be a borderline lunatic to do the same.  Three carefully selected models skied back-to-back-to-back should winnow the field of contestants to one, gloriously perfect ski that seems to have been made just for you.