RealSkiers: A (Slight) Swing Back Toward Sanity 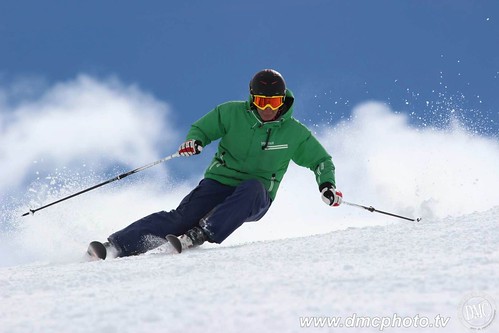 Last week I spent three days immersed in the annual ski show in Denver and, like many of my brethren, almost as much time trying to travel home.

After sifting through the catalogs of 14 major brands, culling and categorizing over 260 models we expect to cover for 2017, a most interesting and welcome development emerged from the data: most new models next year will be less than 85mm underfoot, a significant slimming of America’s ski silhouette.

Before parsing the details of this important tipping point, let’s pause to consider why it matters. For the past several seasons, American skiers have been buying skis too fat their own good, literally. Once skiers are on boards so broad they can’t comfortably tip them to a high edge angle, the chances of them ever acquiring this foundational skill are virtually nil.

Furthermore, most skiers remain unaware that a wide ski on hard snow poses inherently higher risks of knee discomfort and increases the odds of a serious knee injury.

So it is with considerable relief that I report that of the 100+ new models we’re likely to survey in 2017, more than half will be Frontside, Technical or non-FIS race skis.  The genre with by far the largest influx of new models is Frontside, and that’s without our counting the many lower priced package models that populate the nether reaches of this beginner-to-expert category.

The brands that have lent the most momentum to the pendulum swing to narrower sidecuts include Blizzard, who has already launched a full-scale revival of their Quattro label for immediate consumer consumption.

Headlined by two models, the RX (84mm underfoot) and RS (72mm) with a common construction but one with tip and tail rocker and one without, the Quattro collection extends to 10 men’s models and another six SKU’s for women. We’ve already essayed the top 4 models, and as we’ve come to expect from Blizzard, they’re stellar. Drive one if you get the chance.

Blizzard isn’t the only brand to go all-in on new Frontside and Technical models. Atomic bids adieu to its Nomad collection, replacing them with the 9-model Vantage X series, all of which land squarely in the Frontside family.

Befitting the swing to narrower profiles, the flagship Vantage X is the 83 CTI; the Nomad Crimson Ti it replaces was 86cm.  If Carbon Tank Mesh invigorates the Vantage X series as much as it pumped up the power of the Vantage models, expect greatness.

Head and Fischer have long been identified with precise skis that bite into hard snow with the tenacity of a wolverine, reputations that won’t be harmed by the rejuvenation of Head’s Supershape series and the debut of The Curv models from Fischer.

These are unabashedly powerful skis, spun off from World Cup models but with a turn radius and flex pattern mere mortals can bend to their will. If you have the skills, you can extract endless energy from these elite carvers.

Nordica hit a home run with this year’s 100mm Enforcer; for 2017, the emphasis has shifted to the skinny spectrum with a 93mm Enforcer sibling, an 85mm NRGy and an entire overhaul of their Frontside skis, extinguishing Fire Arrows and replacing them with the GT series.

The GT construction emits evident echoes of the NRGy’s, so the newest Nordica’s should share that series power, tenacity and affinity for the fall line.

Perhaps no other Frontside ski of recent seasons has inspired as fanatical a following as the Kästle MX83. Reincarnated as the MX84, we have every reason to believe that Kästle has found a way to make this marvelous ride even more fluid.

As thrilled as we are to see a renewed emphasis on narrower skis, we readily admit to a personal predilection for powering through beat-up powder. As a skier, I’m delighted anytime someone can make a ski around 100mm underfoot that doesn’t feel fat going edge to edge yet rides through 3D terrain in third gear without dropping a stitch.

So thanks, Salomon, for raising your game with the QST 99 and hats off to Rossignol for not resting on its bushels of laurels and putting more power under the hood of its market-leading 7 series and Experience models.

Considering that the market for fatter skis hasn’t exactly withered, it’s possible that what I hope is a trend to skinnier skis is nothing more than a normal product cycle rippling through a number of mainstream brands at the same frequency.

The Frontside category isn’t in any danger of extinction as long as the everyday European remains an on-piste skier, so it was due for some widespread reanimation at some point.

But the reinvestment in the Frontside and Technical categories inspires hope, at least in this skier’s heart of hearts, that Americans will rediscover the joys of riding a narrower ski, such as speed control, trajectory management, balance and timing, more succinctly summarized as “skill.”

If you you’d like to chime in on this subject, we invite you to drop by the realskiers Facebook page.